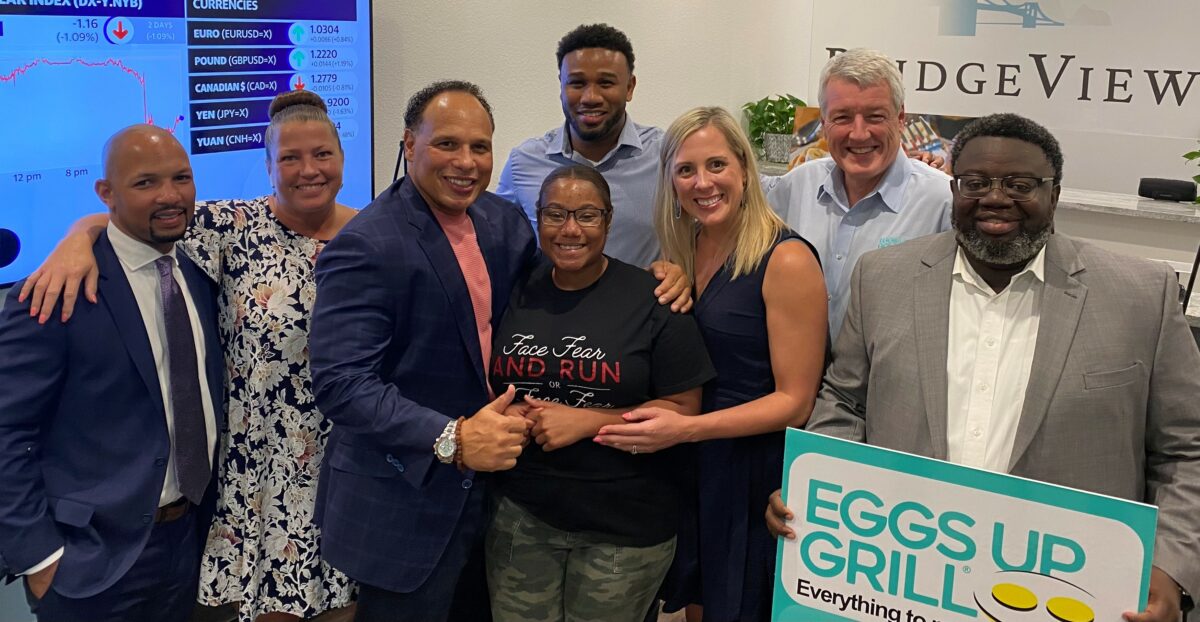 SPARTANBURG, S.C. – Eggs Up Grill, a rapidly growing breakfast, brunch and lunch concept, has inked its largest development agreement in the Brand’s history, and the only deal of its kind in the better breakfast segment. Alliance Food Group owners Ron Donaldson and Ron Donaldson, Jr., will exclusively develop 30 Eggs Up Grill restaurants in Dallas-Fort Worth, Texas. The deal comes on the heels of accelerating growth for the Brand, which has doubled its size over the last three years.

“We are elated to have Ron and his Alliance Food Group team on board to lead the way as we enter the great state of Texas and the Dallas-Fort Worth metroplex,” said Ricky Richardson, CEO of Eggs Up Grill. “This agreement further demonstrates the scalability of our brand to grow anywhere, and the reason why we have been ranked the no. 1 breakfast franchise in the nation two years in a row.”

Alliance Food Group was founded in 2000. The Donaldsons and their partners previously owned 16 restaurants, including Subway, Checkers and several local, family-style restaurants in Florida, Georgia and Maryland. They also had an operations agreement to manage Burger King franchises in several markets. After nearly 11 years outside of the restaurant industry, and making Dallas their home, the Donaldsons are returning to the food business by way of Eggs Up Grill.

“My first impression after visiting Eggs Up Grill was that it was a locally-owned breakfast spot that was genuine and inviting,” said Ron Donaldson. “After realizing it was a franchise, I had to know more, and quickly learned that Ricky and his team share our same foodservice values.”

Donaldson said it’s a blessing to partner with the Brand at this stage because he knows it’s going to continue to grow leaps and bounds.

“Eggs Up Grill is disrupting the breakfast space with a brand that still values the guest and sees them as a family member – from price point to the service of the dish – the guest is family,” adds Donaldson.

Eggs Up Grill now has 57 restaurants, with another 10 set to open before the end of the year, and 20 more planned in 2023. Through August, Eggs up Grill added 50 restaurants to its development pipeline, with the system now totaling 130 restaurants open, under development or committed for future openings. Through the first quarter of 2022, its average annual unit volume (AUV) for the prior 12 months exceeded $1.1 million, with the top 50 percent of restaurants reporting AUV sales of more than $1.3 million. Eggs Up Grill’s system AUV has grown more than 25 percent since 2019.

Eggs Up Grill now operates in seven southeastern states, having opened into Tennessee and Alabama earlier this year. The Brand credits its robust growth with the development support it offers in real estate, design, and construction, and its nationwide food distribution network, best-in-class technology platforms, and superior franchisee and team member training.  Most importantly, though, is the uniquely friendly experience, great tasting food, and attractive everyday value it offers guests.

Alliance Food Group is targeting spring 2023 for its first location, and Rob Hunter will act as director of operations. The group plans to work with local charities that support mothers and children in adverse conditions, and the growing needs of the senior population.

About Eggs Up Grill:

Eggs Up Grill is home to the whole neighborhood, serving smiles from sunup through lunch. The aromas of freshly brewed coffee, savory bacon and hand-cracked, farm-fresh eggs and juicy burgers on the griddle, and warm, attentive team members will make you feel right at home. We are “neighbors serving neighbors”  daily from 6 a.m. to 2 p.m. Ranked as the no. 1 breakfast franchise by Entrepreneur magazine’s Franchise 500® two years in a row, Eggs Up Grill is experiencing record growth across the Southeast. Founded in Pawleys Island, S.C., Eggs Up Grill now has 57 locations, and by the end of 2022 will have a system scale approaching 150 Eggs Up Grills open, under development or committed to open thru development agreements.   For more information, visit eggsupgrillfranchise.com.