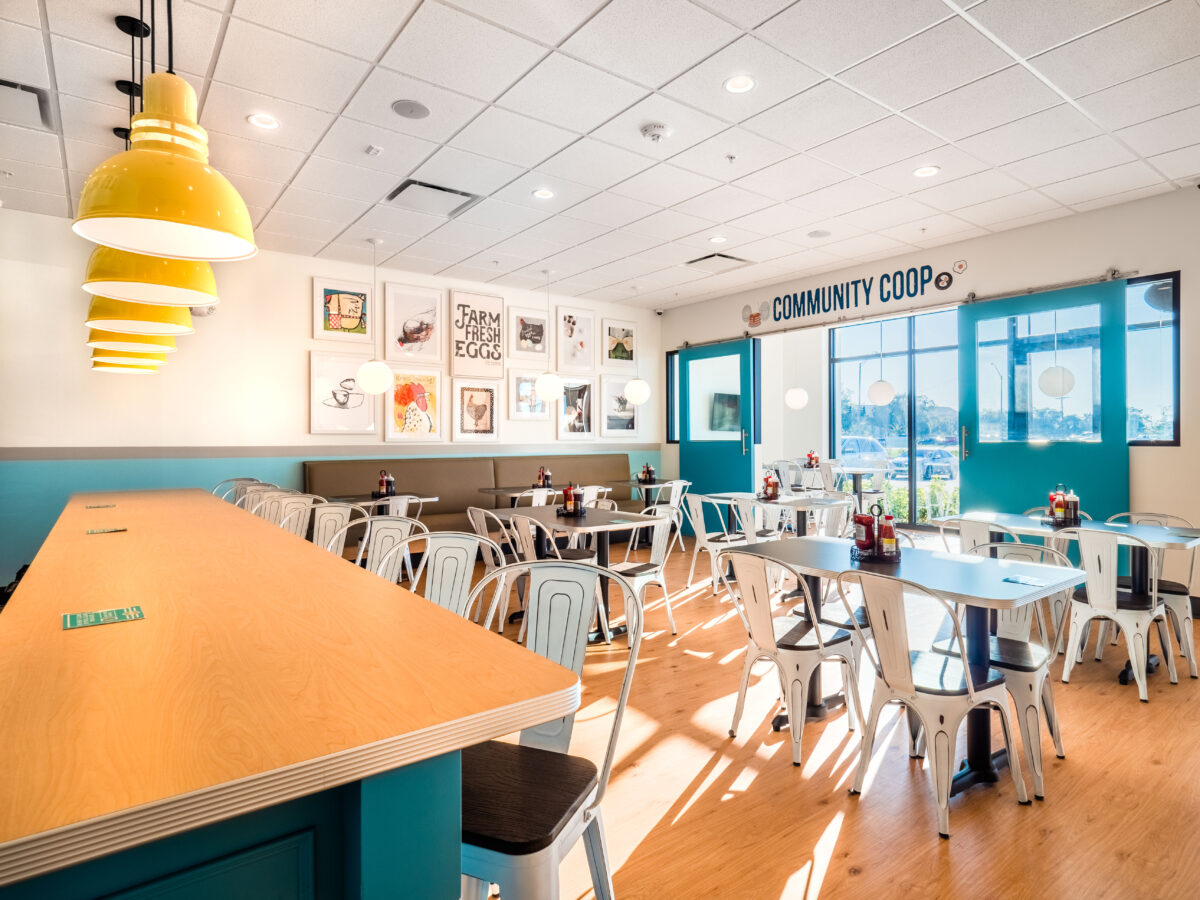 CONSUMER DEMAND FOR SOCIAL DINING HAS SET THE STAGE FOR CONTINUED FRANCHISE GROWTH.

Eggs Up Grill is right where it wants to be, CEO Ricky Richardson says. It’s a point he doesn’t make without backup.

Richardson, whose resume includes more than two decades with TGI Fridays, believes the brunch/breakfast sector today sits squarely in a sweet spot of consumer demand. The social draw of the communal daypart is “huge,” he says. It has been for months, and is only gaining as routines rebalance. Visits to dine-in at breakfast jumped 51 percent last September through November compared to the same window in 2020, when on-premises traffic plunged 55 percent, according to The NPD Group. Lunch rose 44 percent.

But what’s also unique, and suggestive of long-term viability, is the fact the category is stuffed with legacy players who aren’t trying to pick up the pieces or figure out what they stand for.

Even in the years leading up to COVID, the brunch/breakfast daypart and its fresh, clean, and wallet friendly approach, was gathering speed up and down the category, from First Watch (the country’s fastest growing full-serve) to brands kicking franchising into gear, like Another Broken Egg Café, and, naturally, Eggs Up Grill, which was sold to WJ Partners, a Spartanburg, South Carolina-based private-equity firm, in March 2018—four months before Richardson was hired.

At the time, WJ Partners said Richardson’s experience “helping founder-led, franchised restaurants realize their next stage of growth,” was a key bullet point. Eggs Up Grill had 26 units and began franchising in 2004. But to Richardson’s point, Eggs Up Grill’s reputation with guests was a lot bigger than its unit count, and there was plenty of runway ahead. The brand was founded in 1986 in Pawleys Island, South Carolina. First Watch hit the landscape in 1983 and Another Broken Egg in 1996.

Given how recognizable breakfast is at home, there’s not a lot of customer education needed for these chains. COVID only served to give consumers more paths in, with digital and weekday shifts opening occasions.

On the latter, Richardson says work-from-home trends actually helped sit-down brunch/breakfast leaders, which was a far different turn than the disruption shouldered by many quick-serves and local cafes, particularly those that rely on daily traffic, such as coffee on the way to the office. Think Starbucks’ and its shift to mid-morning, afternoon transactions, and toward cold drinks. “There’s more flexibility in a lot of people’s schedules,” Richardson says.

And then there’s the value element. Eggs Up Grill’s average check rests in the mid-$11 range. It’s a price point, Richardson says, below even what eat-at-home can run these days. Plus, “you can eat breakfast from us, and with your friends, typically at the same or less expense than where you can do [quick service],” he says.

“And you get much better food and incredibly friendly service and you’re being served by a team that works for the local owners,” Richardson adds.

Eggs Up Grill doesn’t shout value, either. It’s an implicit message, Richardson notes. That’s become ever-critical amid inflationary trends, and, specifically, the continued rise of menu prices sector-wide. In truth, $11 isn’t far removed, if at all, from what it costs to eat at a fast casual.

The social lure, though, is something Eggs Up Grill has only leaned further into. Namely, by adding mimosas in 2021. Alcohol sales now account for 3–5 percent of take, on average. The initiative is live in about 75 percent of restaurants, with the rest working through permitting.

Again, it’s become a vibrant strategy across the lexicon. First Watch rolled alcohol nationwide for the first time in November 2020. As of June 2021, it was in 244 restaurants and accounted for 3.6 percent of in-restaurant sales at corporate units. Alcohol also increased First Watch’s average in-restaurant customer spend by 30 cents.

Another Broken Egg, which was founded right outside of New Orleans, really began amplifying its beverage program in 2020 and saw average sales hike from $10 to $16. Pitchers of Bloody Marys and mimosas soared 20 percent in 2020. Mix climbed from 8 percent in 2019 to 12.5 percent a year later.

Alongside a dine-in renaissance, the sudden one-two combo of off-premises gains has settled far higher than 2019 marks as well.

Eggs Up Grill’s guest counts are roughly 3 points higher versus pre-COVID, Richardson says, which is something few casual chains can mirror. This as total sales from off-premises ballooned 15 points. So one is not covering for the other.

In turn, when you layer in alcohol gains, Eggs Up Grill’s average-unit volumes are $150,000 higher today than before the crisis (to more than $1 million). The top half of the system is $200,000 ahead.

Development has picked up parallel to sales growth, with Eggs Up Grill closing 2021 with 54 locations compared to 37 year-end 2019, or growth of 45 percent. “Fifteen or 16” should open in 2022, and the brand has a total committed pipeline of just about 100 restaurants, Richardson says.

Eggs Up Grill added resources in culinary development last year and fitted new stores with an equipment enhancement package that includes a streamlined design and the addition of fryers. The chain’s fresh prototype, launched in 2020, is a 2,300–2,800 square-foot-box that seats 85 guests. It’s upbeat, clean, modern, and features a pickup station to open access for online orders and third-party delivery. A pickup window debuted last year at Rome, Georgia, store as well. Eggs Up Grill more recently conducted its first redesign/reimaging at a Myrtle Beach, South Carolina, venue.

“We always focus on how do you take friction out of the guest experience and make it a pleasant experience,” Richardson says, noting there’s currently two pickup windows in the system. “So given the significant rise in off-premises sales, how do we make that more efficient to order ahead of time instead of having to find the parking place, walk in, and wait for somebody.”

The new prototype is visible in about a third of the system. Richardson says the model centered on “the key cues of what Eggs Up Grill is about.”

“We’ve had phenomenal success with that in new restaurants,” he says. “Great compliments, from franchisees, but most importantly from our guests who consistently have been long-time users of existing Eggs Up Grills, but now get to experience the new stores. There’s been a noticeable positive impact on how they think about the brand.”

Richardson’s franchising chops have come into focus since day one. Today, about 40 percent of Eggs Up Grill’s growth is stemming from existing partners adding to their portfolio. The brand has only one corporate unit, which it conducts training in.

The vast majority of Eggs Up Grill franchisees over the years have been smaller operators—people with a restaurant or two. Almost exclusively out of the gates, Richardson adds, they were guests and admirers of the brand who wanted to get involved. “From first respondents to school teachers to execs to educators,” he says.

Richardson says the company didn’t lose any franchisees during COVID. And culture played a lead role. “The consistency and confidence of a brand,” he says. “But the real sense of this is somebody from our community who owns this restaurant and operates this restaurant, and I get to know as a guest. And he or she gets to know me as the owner of the business.”

That localized perception is something Richardson and Eggs Up Grill want to guard closely. It’s one of the attributes that helped it navigated dine-in closures, he says. Customers were drawn to off-premises channels, even if they hadn’t tried them before, because they wanted to support their Eggs Up Grill. They had loyalty to a brand that felt far more intimate than a corporate banner.

Eggs Up Grill wants invested operators who understand the brand’s ethos to further this point. Richardson says Eggs Up Grill not an ideal franchise for an investor looking just to be an efficient operator. Or someone who wants to rely on HQ to mass market and create demand. “We’re a great fit for people who are great restaurant operators, but also really thrive on the fact of being involved, highly involved in their business on a day to day business,” he says.

Even with multi-unit operators, Eggs Up Grill looks for people who enjoy installing a hands-on expectation with store-level leaders. “How you’re involved in the community and how you build those relationships locally,” Richardson says, “not just from a brand-to-guest standpoint; but from a local Eggs Up Grill to the guest perspective.”

Something that helps, and First Watch refers to it as “one-shift” business model, is the work-life balance of running an early daypart restaurant. “I think lifestyle is a huge component of that, obviously,” Richardson says of closing at 2 p.m. “And the experienced franchisees that we’re beginning to attract now, it’s because they have multi-unit aspirations and have other businesses as well.”

Additionally, he says, it’s easier to recruit workers. “Both in quality of team members and a meaningfully lower turnover number than what most experience in the restaurant industry,” Richardson says.

“So they see that as a benefit to this business model—that they’re not going to have the same type of labor challenges in their Eggs Up Grill business that they may have in their other, whether it’s [quick-service] or fast-casual franchise businesses they may have,” he adds.

Of the 54 stores in operation currently, about half are single-unit franchisees. Two, three years in the future, Richardson expects the percentage to sway a bit more toward multi-units.

The pipeline will feed itself, Richardson says, if Eggs Up Grill keeps generating numbers as it has in recent quarters. “The first focus has always got to be on continuing to grow top-line sales,” he says. “Smartly and profitably. Making the size of the pie as big as you can make it, and consistently grow that. But also providing resources and tools and capabilities that help improve the efficiency and profitability of the business model as well. We’re really excited about the profit margins that are being generated out of the business.”